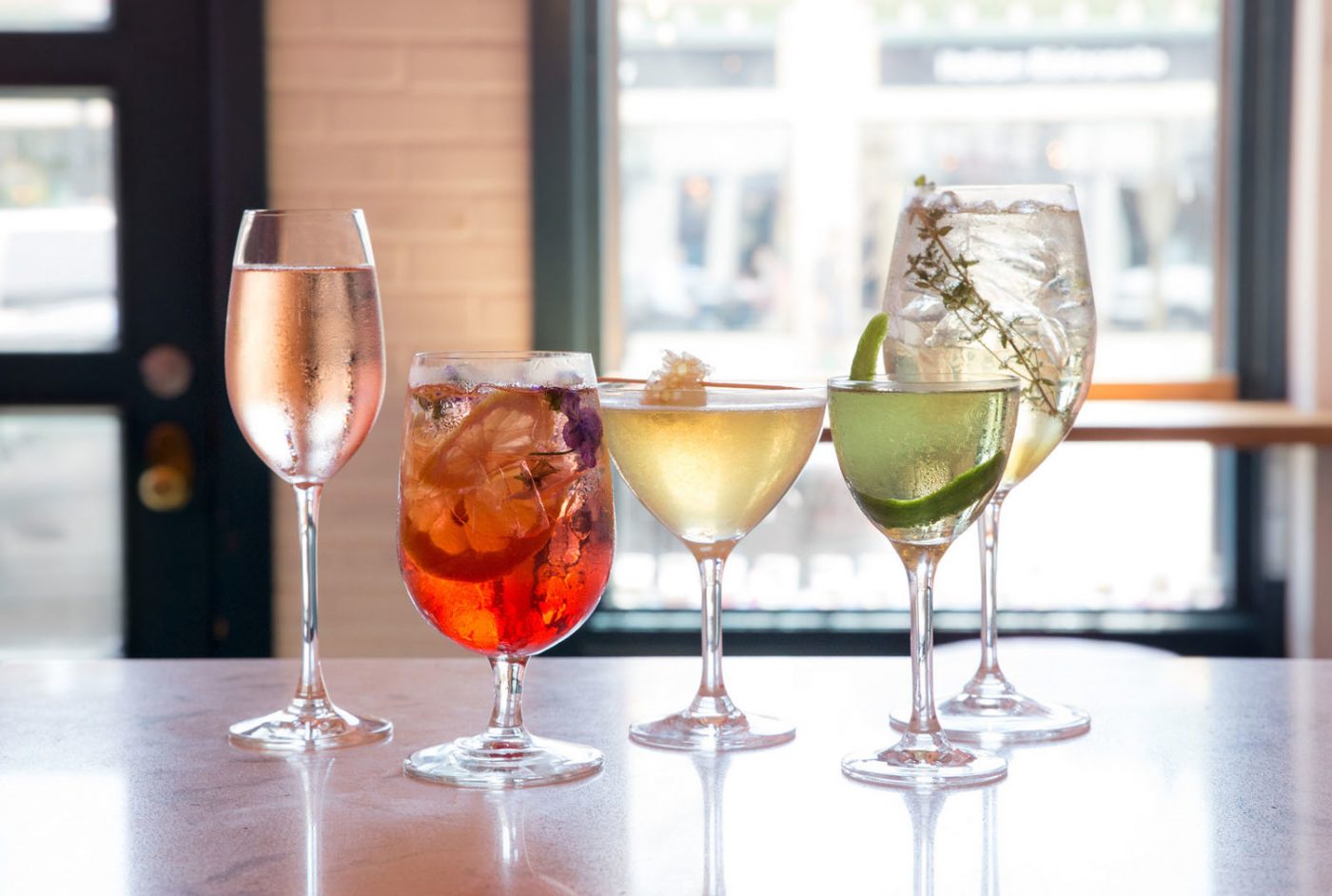 With its northern latitude and snowy winters, Minneapolis isn’t an obvious destination for wine lovers. But the unique bottles stocked by local wine shops and restaurants’ impressive selections tell a different story. The Minneapolis wine scene has come into its own.

“It’s super fun to live here at this point in time, to see people grow in the wine industry,” says Leslee D. Miller, a Minneapolis-based certified sommelier and owner of wine consulting firm Amusée, along with a national wine club, Sip Better. “There’s been pretty significant development in the last five to six years.”

Miller notes that the level of Minneapolis’ wine scene has risen in tandem with the city’s vibrant dining culture.

“People aren’t necessarily familiar with the grapes. Marquette, Frontenac, La Crescent…they shouldn’t taste like Pinot and Cabernet. They have their own flavor. I encourage people to try them all. It’s a really, really fine time to be drinking in Minnesota.” — Leslee D. Miller, owner, Amusée and Sip Better

“You’re seeing interesting, explorative and adventurous [wine] lists,” she says. “We have a lot more available [that] we haven’t seen in the past.”

According to Miller, distributors have expanded what’s available, buyers are furthering their educations and consumers are open to trying wines from up-and-coming regions. “There’s a lot more on the shelf, a lot more to choose from,” she says.

In addition to an ever-increasing array of wines from across the globe, there are also more than 70 Minnesota wineries from which to sip.

“We’re a young wine growing region, with some grapes being developed in the 1990s through today,” says Miller, who has served as a board member and spokesperson for the Minnesota Grape Growers Association. “People aren’t necessarily familiar with the grapes. Marquette, Frontenac, La Crescent…they shouldn’t taste like Pinot and Cabernet. They have their own flavor. I encourage people to try them all.

“It’s a really, really fine time to be drinking in Minnesota. Everybody has their own niche. [There are] so many different wines.”

Troubadour Wine Bar is a cozy retreat in the see-and-be-seen Uptown neighborhood. It offers more than 40 wines available by the glass and nightly live music. The straightforward food menu, with sandwiches, cheese and charcuterie boards, is designed to pair with the wines.

Another Uptown wine destination is Trapeze, an intimate bubbly bar open Thursday through Saturday with bright pink walls and a funky floral mural. There’s a rotating selection of three sparkling and three still wines, plus more than a dozen wine- and spirits-based cocktails.

“We focus on any regions and varietals as long as the wines are made by independent artisan winemakers that support sustainable farming and practice low-intervention winemaking. We’re really committed to sustainable agriculture and supporting diversity.” —Gretchen Skedsvold, co-owner, Henry & Son

About 50 sparkling wines are available by the bottle, which range from a diminutive 350 ml to three-liter bottles sized for celebrations. A food menu features light bites that include oysters, beef carpaccio, chocolate mousse and creme brûlée.

Haskell’s has been one of city’s most prominent wine purveyors since 1934, with more than a dozen stores throughout the metropolitan area. Haskell’s Wine Bar is located on downtown’s Nicollet Mall and offers more than 20 wines by the glass and bottle. A separate list of reserve wines is offered in three-ounce and five-ounce pours, as well as by the bottle. Food options include sandwiches, cheese-focused small plates and daily soup and salad specials.

Kansas City Needs to Be Your Next Wine Destination

Surdyk’s stocks more than 3,500 wines, including a cellar with 250 collectable wines that include cult California Cabernets as well as high-end classics from Bordeaux and Burgundy. While wine regions from across the globe are represented, Surdyk’s is especially known for its impressive selection of German wines. On “4 for $40 Thursdays” customers choose bottles from a selection of reds and whites that are made available for tasting. There’s also a wide range of spirits and beer, and the adjacent cheese shop features more than 350 varieties of cheese, as well as specialty groceries and a deli counter.

For unique finds from independent producers, check out Henry & Son, which showcases an ever-changing selection of around 500 wines.

“We focus on any regions and varietals as long as the wines are made by independent artisan winemakers that support sustainable farming and practice low-intervention winemaking,” says co-owner Gretchen Skedsvold. “We’re really committed to sustainable agriculture and supporting diversity.” This means selections might include bottlings from France and Italy featured as prominently as local Minnesota wines, or even a sparkling wine from Armenia.

France 44 Wines & Spirits carries more than 3,000 wines, though keeps a special selection focused on smaller producers. The store has a strong tasting program, with free tastings on Fridays from 4–7 pm and Saturdays from 1–6 pm.

“It’s the best way to learn about wine you’d rarely get a chance to try,” says owner Rick Anderson. The samples are selected in-house, he says, rather than being supplier-directed, with an eye toward wines that customers may not have tried. In addition to wine, France 44 stocks beer and spirits, while the cheese shop and deli offer sandwiches, salads, cheeseboards and wine by the glass.

Co-owner/winemaker Jeff Zeitler has a unique approach to sourcing ingredients. He relies on fruit, flowers and honey foraged from local backyards to produce Urban Forage Winery & Cider House’s hard ciders, honey mead and fruit wines. Current selections include dandelion wine, rhubarb wine and a red wine made with Minnesota-grown Frontenac grapes. Wines are sold by the glass at the on-site taproom, and winery tours and tastings are offered on Sundays.

Thanks in large part to the University of Minnesota’s efforts to develop high-quality, cold-hardy grapes, there are several wineries within an hour’s drive of Minneapolis. Before setting off, purchase a Minnesota Wine Passport to receive discounted tastings at 48 participating wineries across Minnesota and across the border in Wisconsin and Iowa.

Founded in 1973, Alexis Bailly Vineyard in Hastings, 45 minutes southeast of Minneapolis, is the state’s oldest operating winery. It released the first commercial wines made entirely with Minnesota-grown grapes in 1978, and is today known for its complex reds.

Stillwater’s Saint Croix Vineyards, 30 minutes east of Minneapolis, produces a wide range of award-winning red, white and dessert wines. The tasting room is housed in a restored century-old barn with a deck perfect for sipping and picnicking.

Wild Mountain Winery is perched on a hillside just outside Taylors Falls, located one hour northeast of Minneapolis. All wines are made with locally grown grapes, and the winery also produces a handful of ciders.

Terzo is a restaurant and wine bar featuring seasonal Italian cuisine and a wine program with more than 400 bottlings that span all regions of Italy. The by-the-glass options change often, and a daily happy hour from 5–6 pm offers $7 wines and snacks like chips with aioli, olives and arancini.

Alma Cafe & Restaurant offers inspired wine pairings with its seasonal three-course prix fixe menu. The expansive wine list can also be enjoyed by the glass or as a flight, with unique selections from under-the-radar wine regions like Quebec, Hungary, the Republic of Georgia and Lebanon.

A new addition to the Linden Hills neighborhood, Martina has garnered plenty of attention for its elegant fusion of Argentinian and Italian cuisines and intricately garnished cocktails. The wine list also deserves praise, with a global selection from France, Italy, Argentina, Chile and more, including interesting highlights like Jean Michel Pinot Meunier Champagne, Field Recordings Chenin Blanc and Pilizota Babić from coastal Croatia.

Located in a historic warehouse in the trendy North Loop, The Bachelor Farmer’soft-changing menu is based on seasonal northern ingredients, like locally-raised pork, smoked lake whitefish and foraged hen-of-the-woods mushrooms, to regional specialties like crabapple butter. Similarly, the wine program highlights small, independent producers from cooler-climate regions, particularly Germany and Austria, at a range of prices.

Gyst Fermentation Bar celebrates all things fermented, including cheese, pickles, chocolate, kombucha, beer and wine. An interesting selection of natural wines, like Occhipinti SP68 from Sicily, are available by the glass and bottle, in addition to wine cocktails. Get a $10 discount off any bottle of wine when you order their signature meat and cheese boards, affectionately named The Mother and ½ Motherboard.

Out and About Drinking Destinations

Pair wine sipping with crafting at Upstairs Circus, a DIY bar in the North Loop. Patrons can sip wine while they make projects like bracelets, home décor, wine bottle tumblers and leather wallets. In addition to wines by the glass and bottle, the drink menu features Champagne- and Moscato-based cocktails.

The seasonal restaurants in Minneapolis’ most popular parks also specialize in gourmet twists on concession stand fare, and offer a variety of wines available by the glass or carafe. Visit Sea Salt Eatery (open late March–October 31) in Minnehaha Regional Park for fare like scallop tacos, Bread & Pickle, (open April–Labor Day) on the shore of Lake Harriet for truffle popcorn, and enjoy a beef hot dog topped with kimchi and a fried egg at Sandcastle (open April–October) in Lake Nokomis Park.