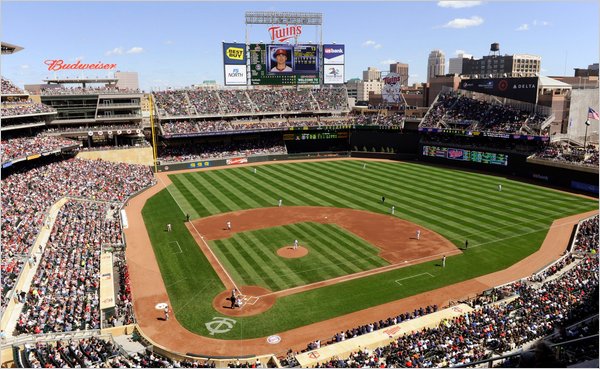 Tis the season for peanuts, popcorn, cracker jacks and…baseball! While I generally set my sights on opening day by pairing a slew of great wine selections to a variety of stadium eats, I can’t

help but share a little beer love in this post for our Minnesota Twins home opener, scheduled for Monday, April 11th.
Baseball, widely known as ‘America’s Pastime’, is a game celebrated by Americans nationwide. While football, hockey and basketball are strong contenders for the most popular sports in our state, baseball season is that one time of year ALL Minnesotans look forward to. Not only does it seem to magically mark the springtime season for many Minnesotans, but when you think about it, is still really is the best outdoor sport in our state to actually watch at the venue itself.
Why? Because it’s social, the weather (in some years) is warmer than the football season, it’s loaded with tradition (you know those ‘Take me out to the ballgame…’ kinds) and the ‘venue’ in our case is chucked full of great new food items and vendors each year.
What I have always loved about baseball growing up the Midwest are these traditions. For my

childhood, that meant Sunday afternoons with friends and family at the old Milwaukee stadium watching Bernie the Brewer slide down the infamous beer slide. And, if we weren’t at the stadium, we were at home watching the game from my grandparents’ 12” rabbit-eared television propped on top of the old GE fridge in their garage. Kids, outside reenacting Rollie Fingers’ and Robin Yount’s homerun moves, while the adults drank beer and grilled brats and hamburgers for our family to enjoy. And, when the beer ran out and the potato chip dips went empty, someone from the clan ran to the local liquor store to buy another six pack coupled with a few more snacks.
Tradition. By definition, it is the ‘transmission of customs (or beliefs) from generation to generation’. And as a traditional Sconni, who still loves to watch a baseball game from a sunny outdoor porch with a good beer in hand, I assumed those same traditions even when I moved away from my home state of Wisconsin over twenty years ago. From Colorado to California, my Sundays have always been that traditional day in the spring and summer seasons for relaxing outside and still watching an occasional baseball game. So, you can imagine my surprise during my first baseball season as a new resident of Minnesota when I was told that I couldn’t just ‘run to the store’ on Sunday for more beer when our clan of baseball fans ran out of our favorite brews and snacks. Suddenly, my ‘tradition’ didn’t feel much like a ‘tradition’.
I admit, as Americans we’re spoiled. The luxuries we’re afforded are beyond most of the world’s wildest dreams, so when I complain about not being able to buy something as simple as beer on Sunday, I sound…well, a little spoiled, right?
But it’s true. I was used to that freedom that I was afforded in every other state I had lived in; the freedom to buy what I want, and pretty much any day of the week that I wanted it. So when the legalization of growler sales passed last year in Minnesota, I was thrilled! I assumed that it meant that the mindset of the ‘old guard’ had softened and that Sunday Sales was soon on the heels of passing. But I was wrong.
Soooo…I can now buy a growler on Sunday at a tap room/restaurant (!), but I still can’t run to my local retailer for a 6 pack? Clearly, I am not the only one that sees something disastrously wrong with the picture. In fact, I know that I am not the only one as thousands of Minnesotans continue to voice, write, tweet and raise their hands high supporting our campaign, Why not Sundays? Sounds absurd, right?  The beer community agrees, too!  Even after they got what they wanted with growler sales, they’re still pushing for Sundays Sales to pass!
So, this baseball season – I raise my beer glass high. And, I salute my fellow Twin Cities beer community friends who stand beside me supporting our cause for passing this bill once and for all. Why? Because their passion for raising awareness to rid our state of this antiquated law is so strong that it led a group of brewers from LTD Brewing to create a beer named: Sunday Sales Pale Ale!

The beer will be released Sunday, May 1 @ LTD Brewing

Whatever baseball tradition you stick to, wouldn’t you like the ability to buy a beer on Sunday at your local retailer, too?
Help join the cause, contact your local legislator HERE and visit whynotsundays.org to share your passion for passing this out of date law today!
And, I’ll see you all Sunday, May 1 @ LTD Brewing sipping on my new favorite beer: Sunday Sales Pale Ale!

(Photo credit thank you to The New York Times & The Minnesota Twins.)