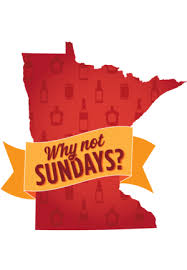 March 22, 2016
The push for Sunday liquor sales in Minnesota is growing as The Minnesota Consumer’s First Alliance continues to promote its campaign.
Leslee Miller is the spokesperson for the alliance and owner of wine consulting firm Amusée.  Miller says the campaign will be introducing a bill to allow Sunday liquor sales this session, emphasizing that the bill will not “force liquor stores to be open on Sundays,” but will give them the right to be if they so choose.
A version of Sunday liquor sales legislation has failed year after year in Minnesota. Several unions, including the Teamsters, strictly oppose this legislation, as well as the Minnesota Municipal Beverage Association. A spokesperson for the association, which represents 250 municipally owned and operated alcohol beverage facilities, says they will oppose this measure again this year.
Last year the legislature rejected a measure to allow cities and counties to decide whether to allow liquor stores to open on Sundays. The measure also included a prohibition on Sunday liquor deliveries in an attempt to appeal to the Teamsters who oppose Sunday deliveries.
Miller says if you want to get involved in this issue visit whynotsundays.org and to contact your lawmaker. Subscribe to Alpha News as we continue to track this issue and several others throughout the session.